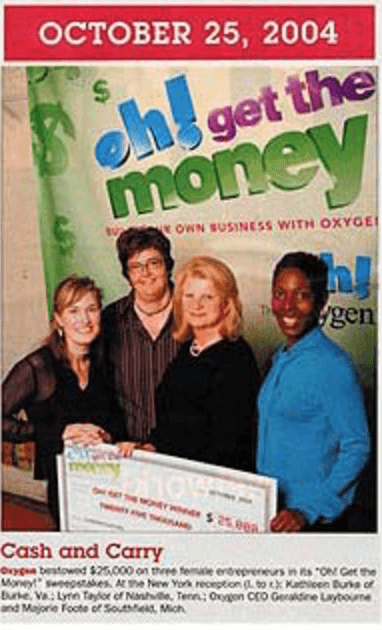 OXYGEN’S “OH! GET THE MONEY” CAMPAIGN
— R. Lynn Taylor Is Honored for Her Entrepreneurial Spirit

NASHVILLE, October 28, 2004 –
Oh! She got the money! R. Lynn Taylor, of Taylor Made Plans, LLC, recently returned from New York City with a $25,000 check and a wealth of business advice from the Oxygen Network’s “Oh! Get The Money: Build Your Own Business with Oxygen” initiative. Now in its fourth year, “Oh! Get The Money” provides aspiring female business owners with the tools, the cash, and the know-how to help turn their small business endeavors into the real deal.

Taylor is one of three women entrepreneurs who received the award out of 16,000 entries based on her business plan for expanding her five-year-old residential design firm, Taylor Made Plans, LLC. Taylor Made Plans Taylor’s idea for offering her urban infill housing designs via the Internet caught the attention of the Oxygen Network because it meets an unfilled niche in the housing market. Infill homes are those built on vacant lots within established urban neighborhoods, and Taylor’s designs fit seamlessly within the area’s historical context. Over twenty of her infill home designs have been built in the Nashville area over the last few years. The 42-year old entrepreneur has over 20 years of experience in residential and commercial design, and her firm has become known as a top resource for homeowners and developers desiring to preserve and rehabilitate properties in older neighborhoods in Nashville, Tennessee.

While in New York City, Taylor attended a small business workshop facilitated by Rosalind Resnick, a top small business expert and successful entrepreneur, and heard from experts in the fields of finance, marketing, law and others. She also filmed commercials that may be aired on the Oxygen Network. Oxygen Media is a 24-hour cable television network that puts a fresh spin on television for women.