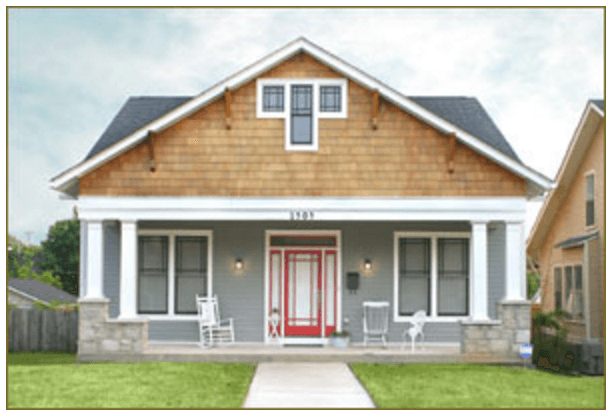 Nashville home designer, R. Lynn Taylor, has garnered national attention for her infill housing designs. The Great American Home Awards,® presented by the National Trust for Historic Preservation and Old-House Journal recently named a home designed by Taylor its 2005 winner in the category of infill residence. The Great American Home Awards® is a national competition recognizing outstanding residential rehabilitation projects in the United States. Established in 1989, the contest honors homeowners and professionals for their dedication to the ideals of preservation, as well as for their commitment to excellence in rehabilitating old houses. The infill-housing category was a new addition to the contest this year and recognizes new homes built in established neighborhoods that fit seamlessly within the historical context.

Taylor’s six-year old residential design firm, Taylor Made Plans, has become known as a leading resource for homeowners and developers desiring to preserve and rehabilitate properties in older neighborhoods in Nashville. Taylor launched a website in 2004 to sell her historic stock plans nationally (www.taylormadeplans.com).

“We have the beautiful look of a historic house with all the modern conveniences,” says homeowner Leslie McGilberry. The award winning home, a one-and-a-half story Craftsman located in East Nashville, was built by Chuck Gann of Gann Construction Group and completed in 2004.“Chuck Gann does great quality work, with exceptional attention to details, “says Taylor. “Details make a house.”

The residence will be featured in the June 2005 issue of Old-House Journal and several Preservation magazines, which will reach over one million readers.